The DAX sell-off may have been put to an end for a while, with major stimulus from CBs and governments in place, along with major long-term support having been met and confirmed thus far. Looking at the monthly chart (log scale), the DAX has a trend-line rising up from 1982 under the 2003 and 2009 lows. The trend-line is also in confluence with the peaks (2000 & 2007) that proceeded the latter two bear market lows that make up part of the 1982-current trend-line.

The blast off the recent low is a good first start for sustaining a low. It won’t likely be an easy climb from here, as there has been much damage to the market’s psyche. The path is likely to be a grinding wind higher marked by starts and stops.

This can make trading a recovery move a bit tricky. The key is to not chase the market higher and wait for dips on long entries. There will likely be two-way opportunities for short-term traders, as well, who want to play both sides of the tape.

The CAC 40 doesn’t have the same type of substantial support as the DAX, but given the tight correlation between the two it can still be used as a reference point. Resistance clocks in at the 2018 low of 4556, followed by the gap-fill at 4603, then the 2011 trend-line that is in confluence with a gap from 4924 up to 5139. As is the case with the DAX, the latter levels will take some time to be seen if they are indeed to be seen. For now, one step at a time as markets look to stabilize. 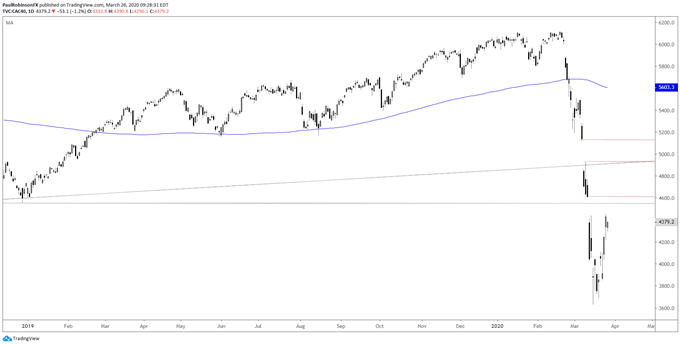