USD/MXN could be building a base for another run

The US Dollar has been coming off lately versus a few of the emerging market currencies after what had been a spectacular run. The rise in USD/MXN was in need of a breather given the unsustainable momentum it was exhibiting. So far, the way it has had a relatively shallow retreat from the highs and is generally moving sideways could bode well for further price appreciation soon.

But it will need to hold the March 27 low at 22.83 to maintain this upward bias, at least without needing to then restart the building process for a continuation pattern. Even better if the April 13 low holds at 23.27 as this will constitute a higher low from the late-March low, suggesting buyers are willing to step in at increasingly higher levels, even if it is just a digestion phase for now.

Patience will be needed here, as the base-building process can take some time. Time would do the overall process some good as overbought conditions get worked off and a clearer continuation pattern can come to light. For now, there are likely to be some swings in both directions that may not hold much weight, so risk/reward at the moment doesn’t look particularly appealing outside perhaps very short-term trades (i.e. day-trades).

Alternatively, when looking at the 4-hr chart, a head and shoulders pattern could come into play, but will need to work a bit more time to work on the right shoulder first. It isn’t a relevant pattern until not only the right shoulder forms, but the neckline must also break to validate. We aren’t there yet with the bullish sequence looking more probable.

USD/MXN Daily Chart (working on building a base) 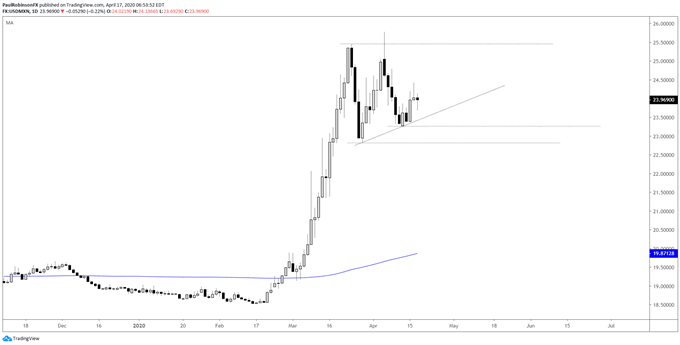