Generally, GBP/USD isn’t providing much of a directional cue at the moment after a fast and furious March, early April. Is the recent weakness a pullback or the beginning of a larger decline? It may take a little time to figure that out, but there are levels to keep an eye on.

If the low from last week can maintain, then we may have a higher low from the one seen earlier in the month. If this is the case, then it is possible the trend off the panic March low will continue. It won’t be long though before a test of significant resistance.

The monthly high at 12647 is also the 200-day MA, and just above there is a swing-low at 12725. This area may take a couple of attempts to break, but if broken then Cable could be well on its way to trading north of 13000. But a stop and reverse could at the least keep price in a digestion phase, which we will have to be patient in waiting for better signaling.

On the downside, if the monthly low at 12163 breaks, then we could see a large retracement develop, if not an outright decline towards the March low. Support levels are lacking beyond the monthly low, so it is unclear where a decline might stop. We would have to monitor momentum in that scenario.

For now, we are left in a state of limbo, which will take a bit of time to sort itself out. But with some patience we should get a better idea of what to expect in the days and weeks ahead. 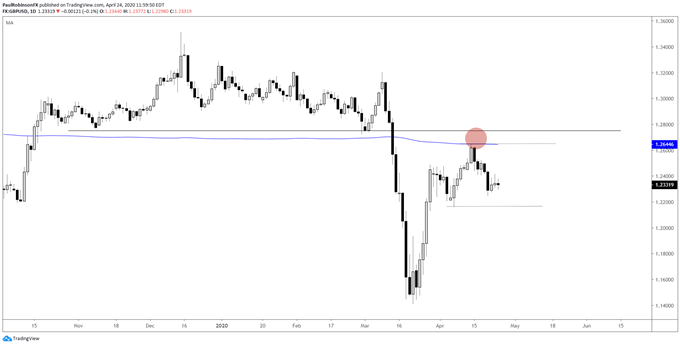