The price action in USD/ZAR has some wondering whether it is weakening, perhaps even forming a double-top, or basing out after a long run and waiting for the next catalyst. At this time it is viewed as being in the latter camp, thus set up to ultimately seek higher ground at some point.

With that in mind, we could still see some back-and-forth choppiness that will offer no real directional cues. This would be a good thing, as overbought conditions built up into April are worked off through a time correction versus one that unfolds via a significant price setback.

Support doesn’t arrive until around 17.84/76, the April low and 2016 “super spike” high. A move down near this area could offer up a good risk/reward set-up for would-be longs, but ideally we see a higher-low carved out well before then. This would indicate an increased willingness by buyers to step in at higher levels.

With some time an eventual break above 19.34 should lead USD/ZAR well into the 20s. How high? Hard to say, it could be rather high given the way high beta emerging market currencies have been moving these days. For now though some patience is likely needed before seeing anything meaningful. Stay tuned. 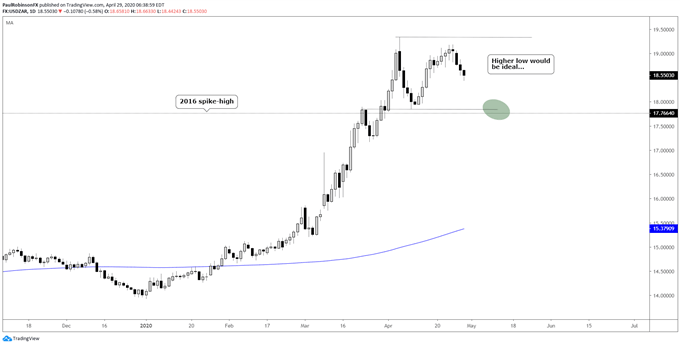