Awash In Oil, But Demand May Have Reached Bottom


The oil market has been a riveting story to watch of late. A health pandemic drives the world to a virtual standstill, with energy demand plummeting in response. Then, a rout between two of the three largest oil producers, Saudi Arabia and Russia, create the onset of a price fall unlike any seen in modern history. According to Wood Mackenzie, the oil and gas consultancy, oil demand may be reaching its bottom. And yes, there is still the inventory overhang to work through. They write:

The big hit has been on jet fuel demand (down 50% year-on-year) and gasoline (down 25%). Diesel and fuel oil – used to transport goods by truck, ship and rail – have held relatively steady.

The WoodMac consultancy estimates that the net effect for April will be a decline of 15-18 million barrels per day (mbd) and continuing into May; it could be closer to 20 million from other estimates. The world was consuming roughly 100 million (bd) in 2019 with a prior similar forecast for 2020. Another consultancy, Trafigura, estimated a 35 million bd hit to demand in April. The EIA estimates a 29 million (bd) loss for 2020 in April. What a difference two months makes-simply unimaginable.

• Global crude storage onshore and on water has only built 260 million bbls MTD.

• This is an implied surplus of ~10 to ~11 mb/d, or less than half of the estimated surplus out there.

Other data points, plus comments from a recent online panel of oil experts, suggest a lot of crude oil floating around as well.

On the supply side, OPEC-plus is making large cuts. Additionally, OPEC and other oil-producing nations agreed to cut global output by 13% or about 13 million barrels a day, notes the Wall Street Journal. Big oil companies that produce in these countries, including British Petroleum (BP), Chevron (CVX), Occidental Petroleum (OXY) and Royal Dutch Shell (NYSE:RDS.A)(NYSE:RDS.B), will have to shoulder some of those cuts. OXY was ordered to cut 58,000 bd in Oman. The article further notes:

“About 27% of Occidental’s output is outside the U.S., while around 15% of Chevron’s oil-equivalent production in 2019 occurred in the OPEC members of Angola, Nigeria, the Republic of Congo and Venezuela.” 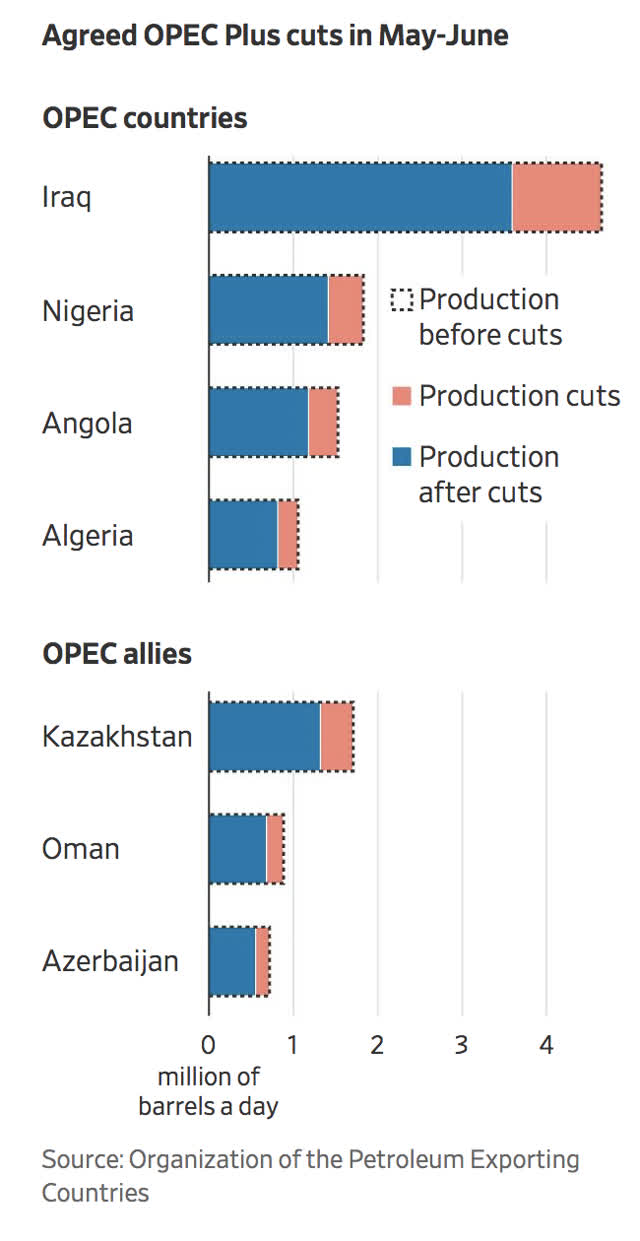 U.S. oil production declines are occurring faster and deeper than originally forecast. Small, private producers, shouldering one-quarter of U.S. production are shutting in wells, alongside larger private producers in the Permian. Pioneer Natural Resources (PXD) isn’t cutting as steeply as smaller producers. They will shut 2,000 low-producing wells that account for 7,000 bd or 3% of company production. Otherwise, they aren’t shutting in more wells since they have hedges in place along with contracts to transport their production to the Gulf Coast, says CEO Sheffield, expecting to export their production. 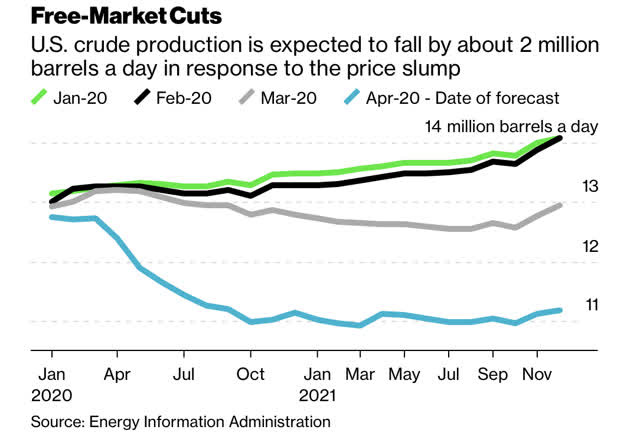 Regarding comments I heard from the panel mentioned above, some key points follow:

• U.S. shale may not be as hard hit as expected. Conventional fields and wells that are shut-in in other countries, for example Iraq, will take longer to bring back to normal production than shale fields/wells, owing to water cut issues and pressure problems. The idea is that some fields will not be as easy to bring back to life as shale fields. With shale assets, while an individual company may have to sell assets, another investor may find ways to use new technology and practices to be yet more efficient. On the flip side, after the downturn, depletion increases in shale wells because investment and maintenance were lacking.

• Oil diplomacy faces a fragile state. Saudi Arabia’s role is still key in managing excess capacity, but its leadership was tarnished from the conflict with Russia when it decided to initially increase production during a time of extreme crisis.

The future of oil may include more cooperation than before between producing countries in the post-pandemic world. As we see, the Majors are not immune from these sweeping efforts to reign in supply and rebalance the market. They are part of the solution-being quasi-private companies now from publicly-visible government mandates and requests to share in the burden. Newly-forming cooperative pacts could manifest in many ways. Both new types of geopolitical risk, legal changes, and partnerships will likely arise, with players attempting to reduce vulnerabilities to current and future shocks.

All major forms of energy-coal, gas, and oil-have experienced significant downward production pressure from reduced demand. Only renewables are expected to increase in 2020, according to the IEA. Carbon emissions will be reduced, the IEA says, reaching 30.6 gigatonnes for 2020, or about 8% lower than in 2019.

The energy transition that was underway will have some course corrections. Firms will be looking to new technologies and practices to adapt to a changing outlook. There will be a place for both incumbent firms as well as new entrants.

Disclosure: I am/we are long OXY. I wrote this article myself, and it expresses my own opinions. I am not receiving compensation for it (other than from Seeking Alpha). I have no business relationship with any company whose stock is mentioned in this article.