April was a welcome reprieve for the Project $1M portfolio. After the large drubbings in February and March, April erased much of the losses of those last couple of months, enabling the portfolio to finish April firmly in the black on a year-to-date basis.

The Project $1M portfolio finished April up 15%, compared to 13% for the S&P 500 (SPY). This was easily the best month for Project $1M certainly for the last 12 months and likely since inception. No position was down for the month, with many such as Veeva (VEEV), Mercadolibre (MELI), ServiceNow (NOW), Promedicus (OTCPK:PMCUF), Facebook (FB) and Amazon (AMZN) up well over 20% for the month.

What was particularly interesting about the collapse and subsequent recovery was the speed on the way down and the speed on the way back up. The sharp down days in March featured multiple days of 7% plus index declines which were particularly painful. I have been mentally prepared for declines of over 20% for quite some time however the speed of the decline in March was like a punch to the gut. Contrary to what may appear to be the case, I felt the magnitude of those declines as much as the next person.

The recovery in the portfolio through April has been equally stunning and up to now, difficult to rationalize. However the recent results from businesses such as Facebook and ServiceNow in particular give me reason to expect that the low point of these declines, at least for the high-quality end of the spectrum, have likely been seen.

The speed of the recovery back up also goes to show you how difficult market timing can be. Those that went to cash after the worst of the declines are likely nursing losses from selling out too late and not buying back soon enough. I have great respect at the bravado of those that make a living being short markets or trading in and out of stocks. The timing of those bets are just so difficult to make and so fraught with danger as has been witnessed over just the last month.

My broader investment focus with Project $1M is the purchase and long-term hold of a clutch of high growth, cash generating businesses that are powered by secular tailwinds. The advantage of these secular tailwinds should be to allow the selected businesses to grow under any economic conditions that may be experienced over the life of the Project $1M portfolio (a decade or more).

Markets may move the prices of Project $1M businesses around here and there, depending on sentiment. However, I am focused on the long-term returns on invested capital that my businesses can generate and the opportunity to deploy that invested capital at high rates of return over a long-term horizon. For those that are new to the project, here are Part 1, Part 2 and Part 3 of the initial investments in the portfolio.

The overall objective of the portfolio is to turn a capital base of $275,000 that was initially deployed in November 2015 into $1,000,000 by November 2025 and outperform the S&P 500 in the process. This will be done primarily through buying and holding high quality businesses, helping returns compound and minimizing tax and trading costs. The initial $275,000 in capital has been fully deployed and will not be added to for the rest of the project’s duration. 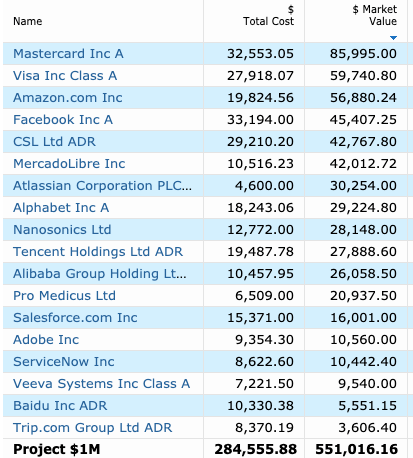 Project $1M ended April with a balance of almost $551,000, up almost $60,000 over the month. The Project $1M performance has been interesting to observe since the beginning of the year. It was able to play strong offense when conditions were good, benefit from the flight to quality and mitigate losses in poor markets when things turned particularly nasty in February and March, and once again outperform in April once sentiment improved.

Minimizing downside capture has been a valuable and fresh insight for me with respect to portfolio performance. Its an underrated attribute but one that I believe very important in a more aggressive growth portfolio which I maintain. I observed a similar phenomenon in May 2019, when the index was down almost 6.4%, when Project $1M similarly outperformed and also in 2018 during the market crash in December.

I made the decision to make some partial disposals in Amazon, Facebook and Visa in March and deploy those proceeds into Adobe (ADBE) and Service Now (NOW), two businesses I’ve had appreciation for quite some time. Amazon, Facebook and Visa (V) are champions, no doubt about it and disposing great businesses (even partially) can make one look foolish after the fact. It was therefore no great surprise to me that both Facebook and Amazon had very strong share price performance for the month, delivering over 20% returns.

I don’t regret making either of these decisions and deploying proceeds into Adobe and ServiceNow. Part of the reason for trimming the positions were the overall size that each represented in the portfolio. I believe that both Adobe and ServiceNow have the ability to become truly large and meaningful contributors to my portfolio over the next five years then either Amazon or Facebook which are now large, mega cap businesses. My decisions here were made not on the basis of the next couple of months but rather the next 5 1/2 years that the project still has to run.

With initial results having trickled in for the portfolio from positions such as Google, Facebook and ServiceNow, I believe that we have seen the worst of the declines. While this is a contrarian view and out of step with most of market, my reason for this is informed less by the results most recently reported, and more by the guidance and future outlook that companies have provided. I look at ServiceNow, Veeva and Atlassian as most indicative of this.

In the midst of the worst of the crisis, when other firms where rushing over themselves to withdraw future guidance, ServiceNow stepped up to the plate and confidently declared 2021 revenue guidance of 25-26% for the year. This wasn’t an isolated instance, as Veeva also, similarly provided a robust outlook back in March for 2021, suggesting growth of 26% for the year. What’s become more apparent with high quality secular growth technology names is that they provide mission critical software, much of which is locked in by subscription contracts, meaning that enterprises that terminate software licenses will generally lose all functionality that the software provides.

In the case of ServiceNow, that’s mission critical IT productivity software that helps IT professionals deal with the challenges of a more virtual workforce. In the case of Veeva, it’s the software and collaboration tools that life sciences businesses depend on for drug discovery and production, much of which will now need to be done in a remote environment. The same can be said of other Project $1M portfolio holdings Salesforce (CRM), Adobe and Atlassian (NASDAQ:TEAM); Atlassian’s reported results also echoed similar themes. The business not only delivered strong results through the March quarter, but also expects good revenue growth through the next few months as well of near 30%.

These characteristics help put a floor under the stock prices of these holdings, particularly given the bullish guidance delivered thus far. For other non subscription, high quality e-commerce businesses such as Alibaba (BABA), Mercadolibre (MELI) and Amazon, anecdotal evidence of worker shortages and heavy consumer demand points to the shift that is taking place from offline to online commerce, something which helps further add to the tailwinds for these businesses.

None of this is to say that the broader indexes can’t decline and make new lows given the more secularly challenged nature of other businesses within the S&P 500 and how badly affected slower growth, debt laden businesses will be. However, I believe there is a very good chance that the Project $1M portfolio has put in its low for the bear market in March.

With the portfolio now positive year to date and positive updates being delivered by the portfolio companies that have initially reported, I still believe double digit portfolio returns will be possible this year. Much of this will be dependent on what the revenue and earnings growth of the portfolio components looks like for the balance of the year, but with initial indications and guidance suggesting that most should continue to report double digit revenue growth, I stand by my prediction that I made at the beginning of the year that ‘mid teen’s returns over 2020 will still be possible.

To see other ideas of high quality, growing businesses that are positioned to be long term wealth creators, please consider a Free Trial of Sustainable Growth.

Disclosure: I am/we are long GOOGL, V, FB, NOW, ADBE, MELI, BABA, TEAM, AMZN, VEEV, PMCUF, CRM, SPY. I wrote this article myself, and it expresses my own opinions. I am not receiving compensation for it (other than from Seeking Alpha). I have no business relationship with any company whose stock is mentioned in this article.

Editor’s Note: This article discusses one or more securities that do not trade on a major U.S. exchange. Please be aware of the risks associated with these stocks.

Is the UK National Trust influenced by a campaign group funded by lobbyists?