At Risk of Further Weakness in Days Ahead

DAX 30 pulled off from near noted resistance

The DAX got knocked over yesterday, losing 3.6% as it continued to pull off from the bottom-side of a resistance zone we were eyeing a week ago as a potentially problematic area – the gap from March 6/9 and very near the underside of the 2011 trend-line.

Now that momentum has potentially turned south an important test of support could come into play. The area around 10200 is important due to the number of repeated tests it had last month. A breakdown below 10198 could have price rolling towards gap-fills down to 9525 or worse.

The US markets remain stronger, but should they weaken even more than they have recently or even just trade sideways, this is not likely to keep much support in place for those markets which continue to show relative weakness. Even if the S&P 500 stays firm the DAX may only chop around, making limited headway. Bottom line, the outlook is neutral to lower at this time.

Are indices your thing? Check out the mid-Q1 Forecast.

The CAC is even weaker than the DAX, with it failing to come close to the March 6/9 gap and 2011 trend-line that the DAX just sniffed out. The turn down has support levels in sight via both price and gap-fills. Keep an eye on 4318 as the next level of support, followed by 4154. To turn things around trade will need to develop above 4720. 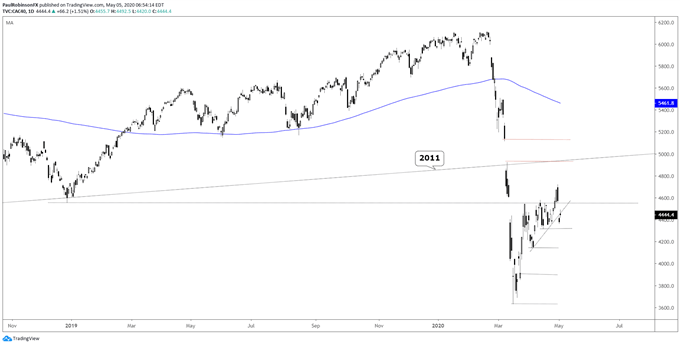