I don’t want to be the guy who yells at the cheering crowds who swarm back onto the beach and into the water that the shark is still out there but, the shark is still out there!  WTF is wrong with you people?  There are now 1.2 MILLION infections in the US as of May 4th and on April 4th it was 308,000 so that’s 892,000 new cases in the last 30 days – an increase of 290% in 30 days.  Even the Mayor of Amity Island would have kept the beaches closed if 3 deaths had turned into 9 deaths during the month.  There were no more deaths – so he thought it would be safe but why were there no more shark attacks?  BECAUSE PEOPLE DIDN’T GO IN THE WATER!!!

What happened when they re-opened the beaches?  Chaos!  Some states do have strict lock-downs in place and have stopped the increase in the rate of the growth of the virus and some have even decreased rate of the spread of the virus BUT IT’S STILL SPREADING IN EVERY SINGLE STATE.  Re-opening the states now when we haven’t contained it in ANY state is MADNESS!!! 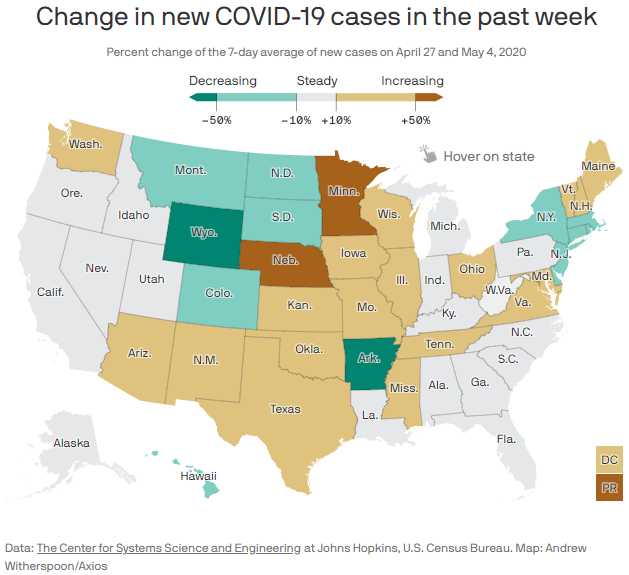 Only 180,000 people out of 1.2M infected have recovered from the coronavirus so far in the US.  70,500 Americans are dead – more than we lost in the 20-year Vietnam War but Donald Trump is drafting all of you into the war against Corporate Losses.  The entire planet has 257,906 deaths and 27% of those are US deaths – despite the US being only 3% of the World’s population and again, that’s SO FAR, as IM infected people are still waiting for their outcome from the disease and who knows how many millions will be infected if we re-open too soon.

WHY TAKE CHANCES?  Why gamble with American lives.