US Stocks May Fall if H&S Pattern Holds

The S&P 500 may be carving out a bearish Head and Shoulders (H&S) topping pattern after breaking rising trend line support guiding the bellwether stock index higher from late-March lows. Confirming the setup seems to call for a daily close below the 2726.50-71.00 area, which approximates its neckline.

From there, sellers are likely to face the next layer of support in the 2603-26 zone. However, the measured down move implied by the H&S setup seems to suggest a push through the 2600 figure is probable if the pattern develops as advertised.

That would portend deeper losses to follow. An interim stop at minor support marked by the December 2018 low at 2316.75 may then set the stage for a challenge of the March 23 low at 2174.00. Invalidating the bearish setup appears to call for prices to establish a foothold back above the 3000 figure.

Get Your Free Equities Forecast

Retail sentiment data shows 77.86% of traders are net-short, with the short-to-long ratio at 3.52 to 1. IG Client Sentiment (IGCS) is typically used as a contrarian indicator, so the skew in current positioning suggests that the S&P 500 is biased upward. However, the tilt in sellers’ favor has narrowed compared with a week ago, hinting that a turn in the opposite direction may be in the works. 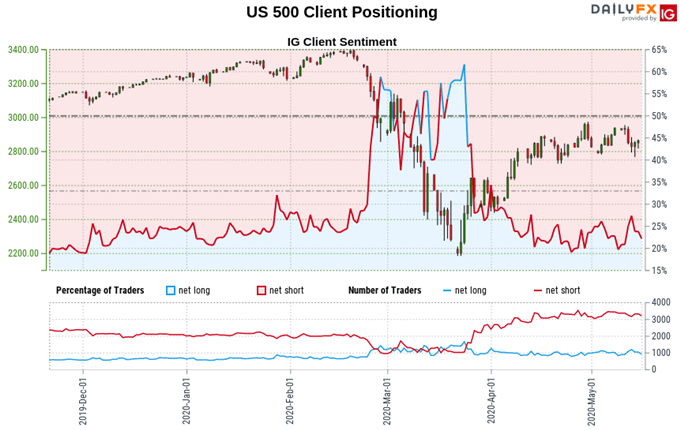