The cynical tactics of a union trying to stop schools reopening were laid bare last night.

Video footage showed leaders of the National Education Union discussing how to ‘threaten’ headmasters who tried to get their staff back to work.

The officials told their members they should refuse to engage if they were asked to return on June 1.

In a further sign of their hardline approach, they described their opposition to the date as a ‘negotiating position’. Mary Bousted, the NEU’s joint general secretary, was even shown accusing children of being ‘mucky’, spreading germs and ‘wiping their snot on your trousers or on your dress’.

The remarks were made in Zoom meetings for thousands of NEU members, recorded on May 14 and posted on the union’s open Youtube account.

A final decision on whether to reopen schools for some classes on June 1 is now in the balance, with Downing Street admitting yesterday that it was not a ‘hard deadline’.

Mary Bousted, the NEU’s joint general secretary, was even shown accusing children of being ‘mucky’, spreading germs and ‘wiping their snot on your trousers or on your dress’ in a Zoom call posted on YouTube (pictured)

Talks between Education Secretary Gavin Williamson and the teaching unions broke up last night without a breakthrough.

Just one in 20 teachers believe it is safe to return to school, claims union

A poll from teachers’ union NASUWT suggested that only 5% of teachers think it will be safe for more pupils to return to school next month.

In a letter to the Education Secretary, Patrick Roach, general secretary of the NASUWT, said the union remains ‘unconvinced’ that wider reopening of schools from June 1 is ‘appropriate or practicable’.

The survey, of nearly 29,000 NASUWT members across England, found that around nine in 10 teachers believe that social distancing will be impossible, or will present major issues and a similar proportion are not confident that the proposed measures will protect their health or the health of pupils.

It also found that 87% of teachers believe that PPE is essential to protect staff against the virus.

Ministers are also facing a nationwide rebellion against reopening from councils. In other developments last night:

The deputy chief scientific adviser said changes to the lockdown, which would include schools reopening, needed a highly effective track and trace system to be in place first;

Mr Williamson is pushing for the reopening of primary schools for reception classes and Years 1 and 6 on June 1. Officials accept that some local authorities will refuse, but believe that academy schools could reopen and form a ‘bridgehead’ to show parents that classes can operate safely.

But some senior figures in government are reluctant to press ahead if the reopening is likely to be boycotted by a large proportion of schools and parents.

Downing Street indicated that Boris Johnson was not wedded to the June 1 deadline.

Experts have repeatedly warned that the pause in education will affect disadvantaged children the most. And 22 European Union states have partially reopened schools without any evidence of an increase in infections.

The Zoom recordings shine a light on the strength of the NEU’s opposition. In one of the videos, Kevin Courtney, its joint general secretary, was shown briefing teachers on how to pressure schools that tried to reopen.

He said the aim was to ‘back heads away’ from reopening on June 1 by suggesting they could be ‘putting lives at risk’. The tactics could involve multiple complaints by union members with hostile social media campaigns. 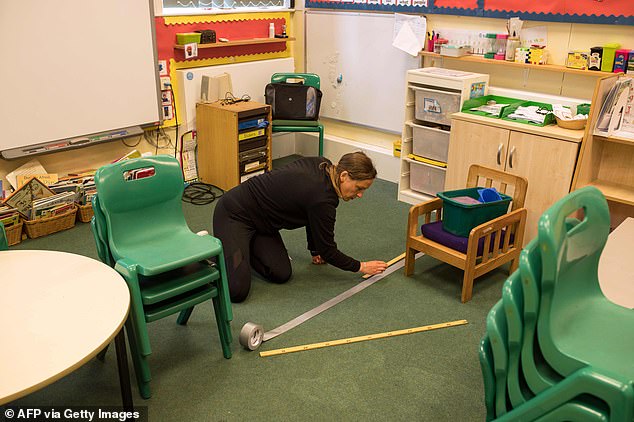 He said ‘employers wouldn’t go near challenging somebody if they are breaking health and safety law in this situation’. Mr Courtney told teachers and union officials to pressurise heads, first by accusing them of violating regulations, and then by ‘threatening’ to denounce them on social media.

Dr Bousted boasted that the 450,000-member NEU had ‘made the running in this crisis’ and said the union’s opposition to June 1 was a ‘negotiating position’.

‘They now clearly admit that it is nothing to do with what they are saying it is – it is to get back at the Government. They are using despicable tactics which ultimately will damage the economy and will damage lives.

‘They have swept aside concern for vulnerable children and the needs of children from poorer communities; they have swept them aside in a ghastly attempt to damage the Conservative government.’

An NEU spokesman said: ‘This Government is putting an unbearable strain on school leaders and the wider education workforce to work through an impracticable and potentially unsafe timetable.

‘The NEU’s position is well known and well recorded. We want the wider opening of schools when Government provides the scientific evidence to show it is safe to do so. We believe the vast majority of head teachers agree with us and will work with us to avoid any prospect of unsafe working environments.

‘We continuously engage with our members and the wider school community on how best to guarantee this. Families also need to know that there is a sensible and measured approach to the wider opening of schools.’

A DfE spokesman said: ‘We have engaged closely with a range of relevant organisations, including the unions, throughout the past eight weeks, including organising for them to hear directly from the Government’s scientific advisers last Friday, and will continue to do so. We have also published detailed guidance on the protective measures schools should take.’