USD/ZAR – Dollar About to Get Turned on its Head vs Rand?

USD/ZAR was holding up well along with other $/EM pairs such as USD/MXN, but just like that the constructive continuation patterns are falling apart and that may mean the outlook could turn decidedly bearish.

Now that potential for the triangle were watching develop is off the table, we will need to turn to support via the 2016 spike-high that caused a little ruckus in late-March, early-April. The level is 17.76. In my book it is the final line-in-the-sand as far as support, and if broken we could see a much more meaningful decline unfold in the near-term.

It might not mean USD/ZAR runs a ton lower, but it could make rallies sellable for the foreseeable future. It would be reasonable to think even if the broader outlook is still bullish that we could see a drop down to 16.50 or a little worse before turning back higher. If a decline were to turn into an outright reversal in trend, then the 200-day and worse would become targeted.

But for now if support holds around the 17.76 mark and USD/ZAR can remain buoyed, then not all will be lost in the potential for another congestion pattern, but it will take some more time. And that means traders could be mired in more choppy price action as we roll on into summer. There is still the possibility we get another form of a wedge, or not. For now, just going to focus on upcoming support and take it from there.

Check out the Mid-Q1 USD Forecast 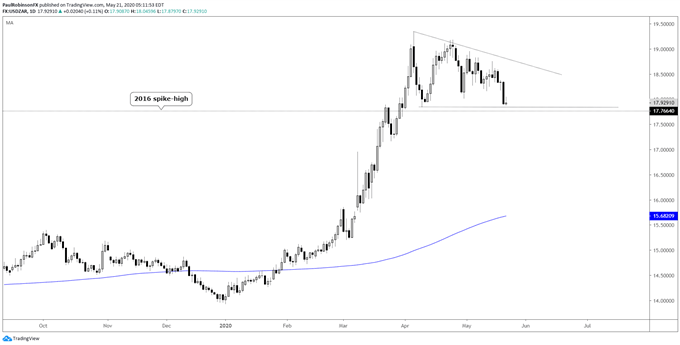