In an environment when the energy market looks fragile and the U.S. onshore utilization and day rates have been keeping low, Nabors Industries (NBR) persisted with its policy of operating the super-spec AC rigs while diversifying its revenues base away from the U.S., thus protecting from the onshore market weakness.

However, since the global pandemic has hit the international energy demand, NBR’s performance will reflect the on-going dip in activity in the short term. To offset the margin erosion and increase free cash flow, it has initiated various cost-reduction measures, including a proposal to suspend dividends. It has extended its debt repayment schedule. The company’s leverage is higher than some of its peers, which can be concerning when the credit market is getting tight. The returns from the stock, in my opinion, will remain muted in the short term. Over the medium term, I expect the high-margin Nabors Drilling Solutions and an array of technologies would offset some of the margin pressure. However, investors might want to hold back until the drilling activity gains some stability in the U.S.

The Industry Challenge And Cost Management

In Q1 2020, NBR’s average rigs working in the U.S. weakened, falling by 16% compared to the FY2019-average. Its rig count in Canada, on the other hand, increased dramatically (54% up). International rig count remained steady in Q1. However, the short-term challenge arising from the demand concerns in the coronavirus fall-out and the energy supply glut led to steeper U.S. rig count fall in the industry in Q2 (54% down since Q1 so far). In the aftermath, the EIA now estimates crude oil consumption contraction of 7% in 2020 compared to 2019. It is, however, expected to bounce back in 2021. The crude oil price has been on an uptrend in the past month. The EIA expects the crude oil price to remain steady in 2H 2020 and recover sharply (50% up) in 2021.

However, NBR’s management believes that the crude oil inventory will remain high in the short term. While the problem will be resolved when the producers cut down production in a coordinated manner, it remains uncertain as to the timing of the energy price recovery. Outside of the U.S., the company’s international operations held up well except in Latin America, where the pandemic-led lockdown has been imposed strictly. COVID-19 will slow down its global operations, but the effect will be less acute than the U.S. 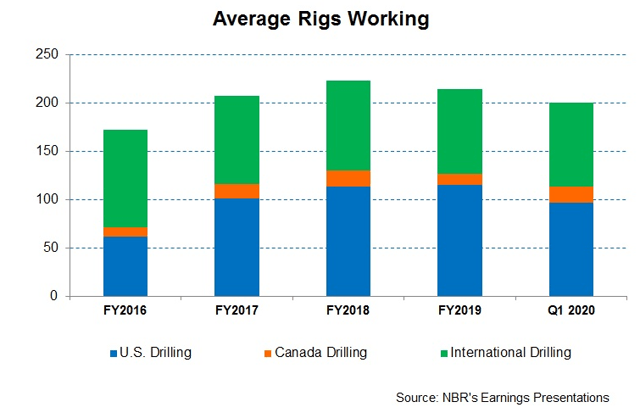 As the U.S. onshore producers respond fast in reducing the production level, the energy service providers and drilling operators like Nabors have been impacted adversely. So, in addition to reducing variable costs, it has taken measures to decrease overhead costs to improve free cash flow. To reduce fixed costs, it temporarily reduced compensation and right-sized the field support organization. It aims to realize $85 million through FY2020 starting Q2. The second leg of the cost reduction program includes revising down the capex budget by $75 million below the earlier capex budget. Plus, it may suspend its dividends, which would save an additional $7 million in FY2020, and another $14 million in FY2021. These efforts will not only mitigate the pressure on the operating margin but will also improve FCF and lessen net debt. A higher margin and lower capital intensity are expected to be valued highly by the investors in the current market where the activity has fallen, and the capital market exudes elevated risks.

NBR’s turnaround plan does not hinge on cost reduction and lower capital intensity strictly. It is also offering value-added products to increase energy production efficiency. It has invested heavily in creating a super-rig fleet of rigs as well as in drilling automation software. Such rigs help increase revenue opportunities, improve margins, and result in a resilient market share. Among the notable achievements in Q1 was the company’s commencement of an offshore platform rig in Mexico and a large gastric in Kuwait. In April, the company’s joint venture with Saudi Aramco (ARMCO), SANAD, commenced the 43rd rig. By Q1 2020, more than 50% of its offerings are in the fully automated drilling space, while a year ago, it was just 10%.

The onshore companies account for more than 75% of NBR’s rig count. From 2014 to Q1 2020, it gained a 12% market share with the supermajors (i.e., the large upstream companies). While it fielded 54 AC 1500 rigs with the supermajors in 2014, it currently operates 109 such rigs with these companies. The majority of the gains have been with the Tier 1 companies in the U.S. onshore. As a result, the average utilization of the 78 active U.S. onshore rigs is 84%, while for two of its active legacy rigs, the average utilization is only 3%. It is targeting to increase market share from ~18% to more than 20%, which would offset the fall in the rigs operating. Because these super-spec rigs are pad-optimal, they require less capex and have technical advantages over the refurbished legacy rigs operated by some of Nabors’ peers in the market.

The use of the company’s technologically enhanced drilling solutions like ROCKit, REVit, Navigator, and ROCKit Pilot will help enhance the performance of slide drilling while increasing the penetration rate and reducing unplanned trips. Outside of the U.S., the company’s drilling operations have been more stable, although the low crude oil price and demand drop off have disrupted the flow. I expect the use of advanced technologies in drilling solutions to increase in the international markets, which would increase NBR’s penetration rate and make up for some of the loss in the rig count in Q2. 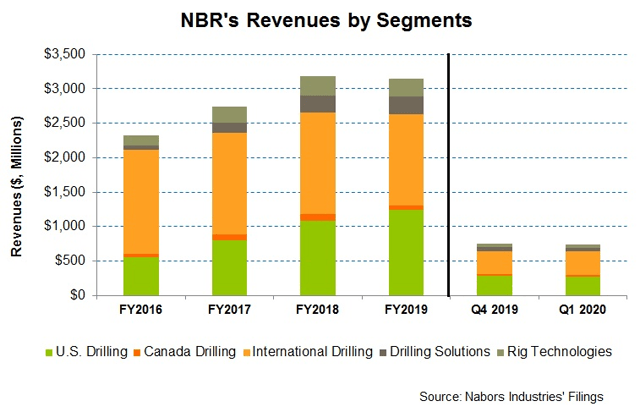 In Q1, the company’s U.S. Drilling rig count decreased by 16% on average compared to Q4 2019. Also, the U.S. Drilling segment rig margin was $9,900 in Q2 2020, which was 22% lower compared to Q4 2019. The sharp reduction in U.S. drilling activity impacted the spare parts and repairs sales adversely. In Q2, the management expects the average rig count to decline by 33% from the current level, while the drilling rig margin may fall by 9%. Continued pricing erosion and higher costs related to stacked rigs would deflate margin in Q2. Although lower operating costs due to restructuring initiatives, as discussed above, will offset some of the pressure on the margin, significantly lower rig count would not allow cost absorption to take much effect, leading to higher costs in the short term.

The company expects a lower EBITDA margin in the U.S. Drilling segment in Q2, although it did not make any forecast on the magnitude of the fall due to the current uncertainty in the energy market. International activity is expected to be more resilient, but would still be lower compared to Q1.

The international rig count has weakened considerably in 2020 so far. Since the beginning of the year, 189 rigs have been retired (17% down) in several international locations in the industry. However, NBR outperformed the market, losing only 2% of its international rigs in the past quarter. In Q1, its revenues from International Drilling held steady, increasing by 2% compared to a quarter ago. During the quarter, the company deployed rigs in Kuwait, Mexico, and Russia. However, trouble in Venezuela, where the company’s customers shrank operations, offset some of the gains in the international markets. Overall, the adjusted operating income in international operations ran into the negative territory ($4 million operating loss) in Q1 2020.

However, the company’s performance improved significantly in Canada. Led by higher rigs operating, quarter-over-quarter revenues in this region jumped up by 32% in Q1, while it managed to register a marginally positive operating income. You can read more about the company’s margin discussion in my previous article here.

In Q1 2020, NBR’s cash flow from operations (or CFO) was $59 million, which was a decrease (15% down) compared to a year ago. The year-over-year revenue decline led to the fall in CFO in the past year.

In Q1 2020, the company’s capex declined by 59% compared to a year ago. Lower capex offset the fall in CFO, and the company turned free cash flow neutral. In FY2020, it plans to reduce year-over-year capex by 44% compared to FY2019. Its forward dividend yield is 6.8%. However, it may suspend dividends, as I discussed earlier in the article. National Oilwell Varco (NOV) has recently suspended its quarterly dividend. You may read my latest take on NOV here.

NBR’s liquidity as of March 31, 2020, was $1.06 billion. After extending the long-term debt repayment by four years, it has only left with $316 million to be repaid between 2020 and 2021. Its debt-to-equity ratio (1.6x) is higher than its peers’ (HP, PTEN, NE) average of 0.93x. With the available liquidity, lower capex, plus relatively small repayment obligations in the near term, the company’s balance sheet looks comfortably placed in the short term. However, without further refinancing, it needs to repay $1.4 billion of debt between 2024 and 2025, which would stretch its finance. Under the current circumstances, when the capital market is getting tighter, it can spell serious trouble to the company’s medium-term survivability.

What Does The Relative Valuation Imply?

According to data provided by Seeking Alpha, none of the sell-side analysts rated NBR a “buy” in May, while 13 of them rated it a “hold.” Seven of the analysts rated a “sell” (includes “very bearish.”) The consensus target price is $15.08, which at the current price, has ~59% downside. However, I think the sell-side analysts are underestimating the stock’s potential returns. I do not see sufficient risk factors to lead to such negative returns over the next four quarters.

What’s The Take On NBR?

The oil drillers’ outlook is on a short leash in 2020 as the upstream companies’ budget cut pressed many legacy rigs to be retired or stacked. On top of that, the utilization rate in the U.S. onshore became negligible as the day rates kept doggedly low, which will keep returns from the stock low or in the negative territory in the short term.

In this scenario, NBR managed to do a couple of things well. One, its efforts to file the super-spec AC rigs in place of the legacy rigs have started to attract more crowd, particularly in the supermajor community. Although such rigs required the company to invest heavily, the higher return prospect can outweigh the costs. Two, with 46% of its revenues arising from the international operations, it is relatively insulated from the U.S. market’s current weakness. However, I doubt the depth in that argument in the short run, because even the international markets will not be spared from the energy price vagaries. In line with its peers, Nabors has initiated various cost reduction measures, including a proposal to suspend dividends. The company’s steps to increase free cash flow and extend the debt repayment schedule can turn out to be essential, especially when its debt-to-equity ratio is higher than some of its peers’.

Supercharge Any NFT with the CardFi ‘Gift Card’ Protocol