Lockdown in Lleida in Catalonia tightened as 140,000 residents ordered to stay indoors


Lockdown measures in a Spanish city 100 miles from Barcelona have today been tightened, with residents now ordered to say indoors and only leave for food or to work if ‘essential’.

In the first lockdown of its kind since the end of the state of emergency in Spain, around 140,000 people in Lleida, just under two hours drive west of the Catalan capital, have been told to remain in doors.

People in another seven municipalities near Lleida in the Segrià region have also been given the new lockdown order, which means they can only venture outdoors to buy food or go to the bank or for work if it is an ‘essential service’ and cannot be done from home.

Meetings of more than 10 people and weddings have also been banned, while restaurants have been told they can only do home deliveries.

Lockdown measures in a Spanish city 100 miles from Barcelona have today been tightened, with residents now ordered to say indoors and only leave for food or to work if ‘essential’. Pictured: Arnau de Vilanova Hospital, in Lleida 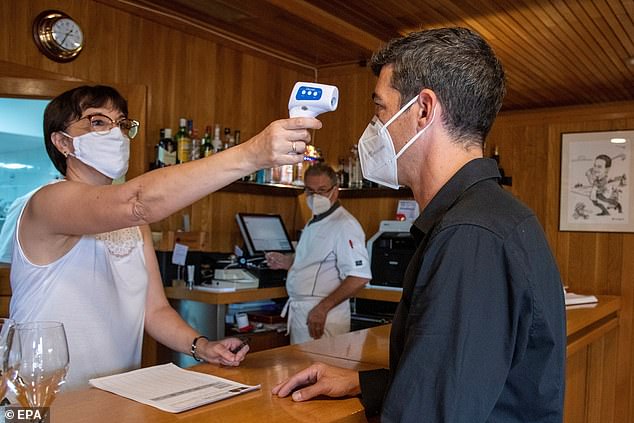 In the first lockdown of its kind since the end of the state of emergency in Spain, around 140,000 people in Lleida, just under two hours drive west of the Catalan capital, have been told to remain in doors. Pictured: A waitress measures the temperature of a client in Lleida 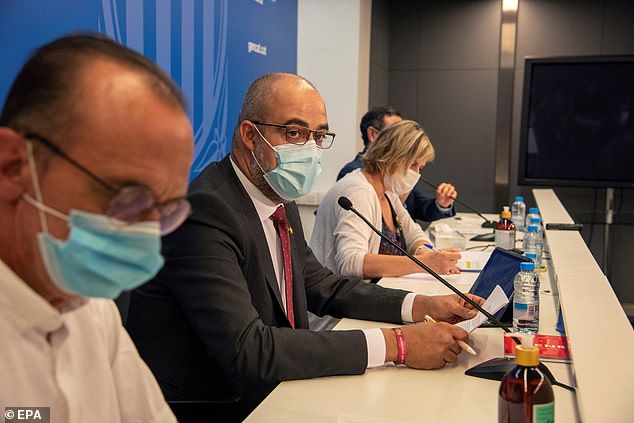 People in another seven municipalities in the Segrià region have also been told they can only venture outdoors to buy food or go to the bank or for work if it is an ‘essential service’ and cannot be done from home. Pictured: Catalonian regional government Home Affairs councilman, Miquel Buch (centre) during the press conference to inform about the outbreak of the coronavirus in Lleida, 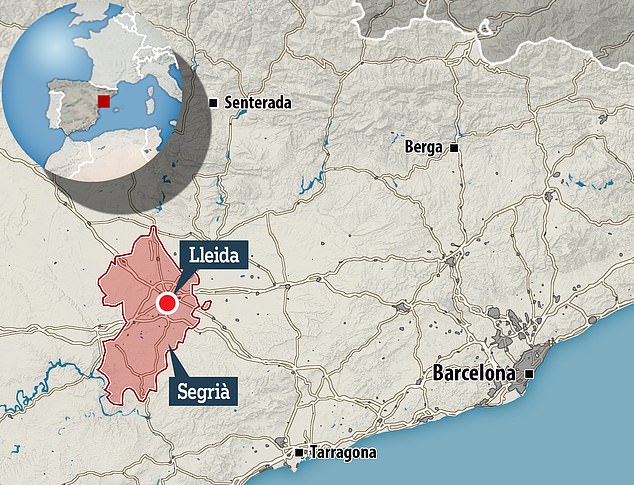 The lockdown is a near return to the first weeks of the Spanish coronavirus lockdown – one of Europe’s toughest – when children were cooped up in their homes for nearly two months.

The regional government-imposed decision is a tightening up of existing restrictions which had been in place in the entire Segrià region, which is home to around 400,000 people, for more than a week.

It follows a rise in the number of new Covid-19 positives.

Catalonia has registered 816 new cases in the past 24 hours. The Segrià region is said to have accounted for 190 of the total.

Two days ago the Catalan government ruled out the lockdown rule it is now bringing in, saying it believed the mandatory use of face masks could help combat the spread of the virus.

A local official said at the time: ‘We are not envisaging a total lockdown. People cannot be locked away indoors.

‘The use of face masks in public is now mandatory at all times but we can’t have police officers watching everyone so individual responsibility is very important.’

Part of the La Marina region north of Lugo in Galicia also remains on lockdown, although there people are being allowed out of their homes and are simply being stopped from entering or leaving the area with some exceptions like medical emergencies. 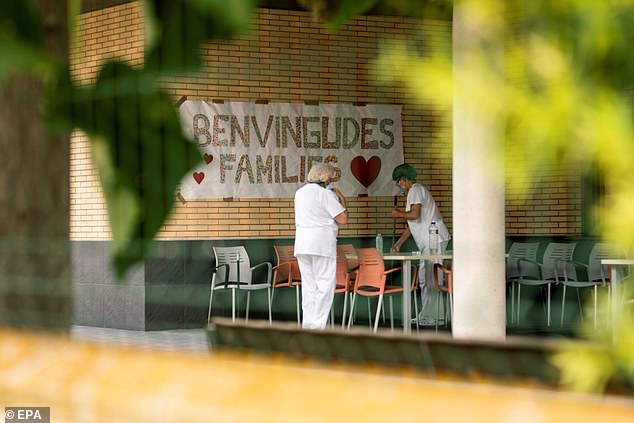 The lockdown is a near return to the first weeks of the Spanish coronavirus lockdown – one of Europe’s toughest – when children were cooped up in their homes for nearly two months. Pictured: Staff stand in front of the residence for old people Pla d’Urgell which remains confined again due to the new outbreak of the coronavirus cases in the city of Lleida 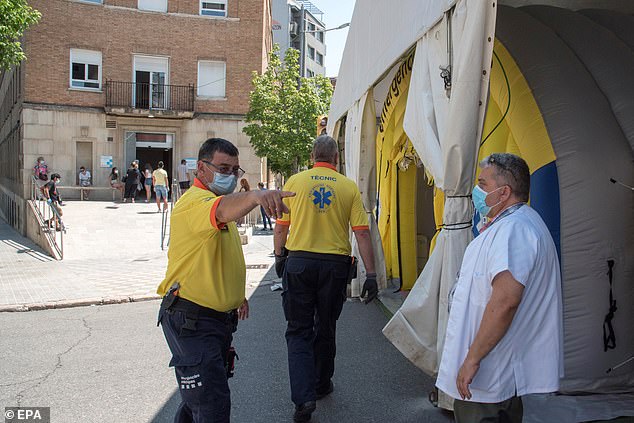 Catalonia has registered 816 new cases in the past 24 hours. The Segria region is said to have accounted for 190 of the total. Pictured: View of the emergency places in sports pavillions for the agriculture workers to avoid the spread of the new cases of coronavirus in Torres de Segre, in Lleida

British tourists were allowed to enter Spain for the first time in three months on June 21 when the country’s state of emergency ended.

And many Britons have now started to make the trip to warmer climates after the UK government opened dozens of ‘air corridors’ to countries, including Spain.

It means Britons will not have to undergo a self-imposed two week quarantine when they arrive back in the UK from the 59 countries listed.

But some British tourists claim they are having to resort to sleeping on beaches and booking new rooms in Europe after paying for hotels that are still closed due to coronavirus lockdown.

Meanwhile boozy Britons are already back in party hot-spots such as Magaluf following the loosening of restrictions.

Several regions including the Balearic Islands, Catalonia and the Costa del Sol have now made, or are about to make, the wearing of face masks obligatory at nearly at times in public.

Previously they made people wear the face coverings outdoors in public only when social distancing of around five feet could not be guaranteed.

The Segrià region was put back into lockdown, meaning no-one was allowed to enter of leave, earlier this month following a spike of coronavirus cases.

Segrià county, an agricultural hot spot with a number of slaughterhouses, has faced a sudden jump in cases compared to the rest of the region.

There have been 62,057 confirmed cases in Catalonia since the outbreak began, with 5,673 related deaths.

On Twitter Catalonia’s regional president Quim Torra said last week: ‘The people of #Segrià should remain calm. You can count on our support. We need to take every measure possible to protect you and prevent an even larger rise in the number of new cases.’ 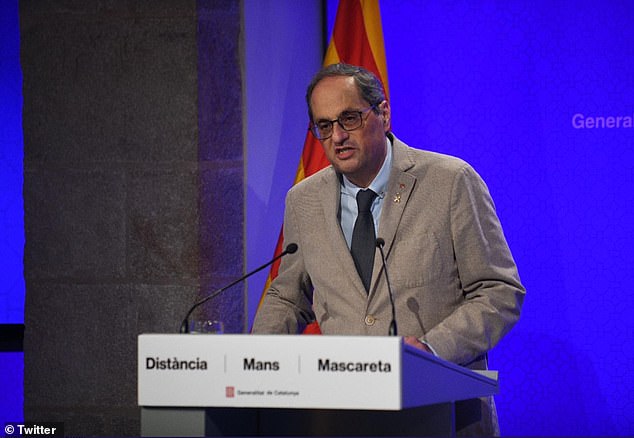 Catalonia’s regional president Quim Torra (pictured) told reporters his government had decided to ‘confine the del Segria zone’ after a rise in cases, adding that no one would be allowed to enter or leave the area 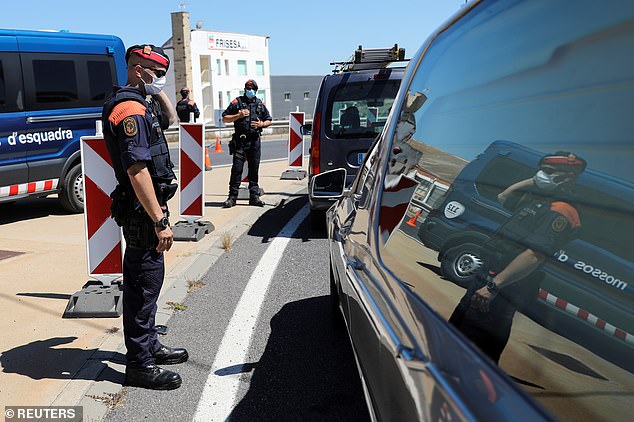 The western Catalan city of Lleida and the rest of Segrià county was put under lockdown from midday today. Pictured, police officers check the documents of people travelling on vehicles at the entrance of Lleida

The situation had become so serious in recent weeks the health emergencies service had to preemptively build a field hospital outside Arnau de Vilanova hospital to treat up to 105 patients if needed.

The number of cases is not currently a concern, health officials said, but they want to curb the community spread before the virus becomes out of control.

Many of those infected are believed to be seasonal fruit pickers, with the outbreak also hitting an apartment building, a nursing home, and a shelter for homeless people, according to Anadolu Agency.

The county borders the Spanish region of Aragon, which was the first Spanish region to declare local lockdowns when the country’s state of emergency came to an end on June 21.

British tourists are having to resort to sleeping on beaches and booking new rooms in Europe after paying for hotels that are still closed due to coronavirus lockdown.

Craig Fletcher, 38, booked his trip to the Canary Island of Tenerife through Loveholidays, who have already been criticised for failing to tell customers that their bookings are no longer available due to lockdown.

The 38-year-old arrived at the Hotel Blue Sea in Puerto de la Cruz, Tenerife where a lady was, ‘freaking out saying “you can’t come in, we’re closed”.’ 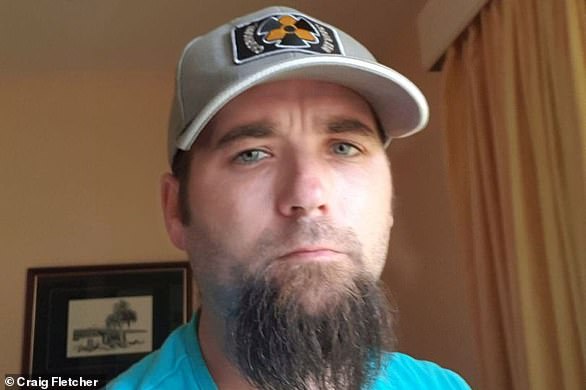 Pictured: Product Manager Craig Fletcher, 38, who turned up to his Loveholidays pre-booked hotel in Tenerife, only to find that it had been closed due to coronavirus lockdown

She told Mr Fletcher, who works as a product manager, that he was not allowed to enter because of coronavirus restrictions.

The woman advised him to take a taxi to the Blue Sea’s sister hotel, the Costa Jardin, which is roughly a mile away.

On arrival, Mr Fletcher was disappointed at the vast difference in accommodation.

‘I booked a hotel with a huge pool, but (the Costa Jardin) had a pool maybe the length of an average backyard,’ he told the Mirror.

He added that the room’s furniture was not up to a suitable standard and that it looked like they ‘got it on the cheap’.

‘The restaurant is nice but there is a single bar. There are also 48 sun loungers for 300 guests,’ he said.

‘I’m basically in lockdown on holiday.’.

Mr Fletcher, who believes the taxis and price difference between hotels have cost him £286 in total, said he tried to contact Loveholidays but  was unable to get through. 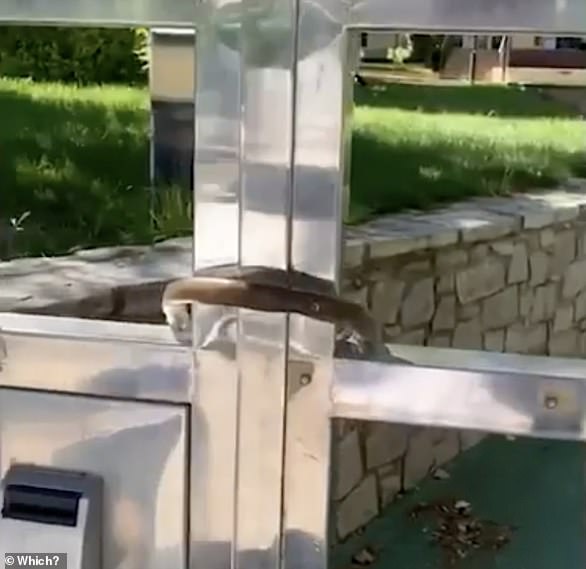 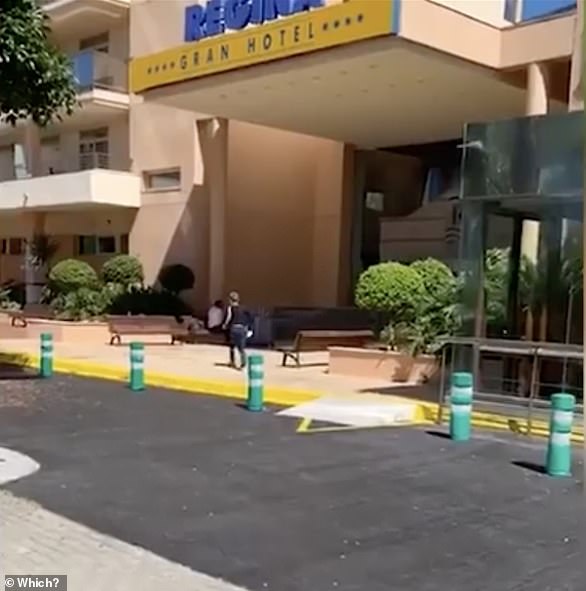 Scenes outside the Regina Hotel in Spain, where customers arrived to find the resort had been locked down 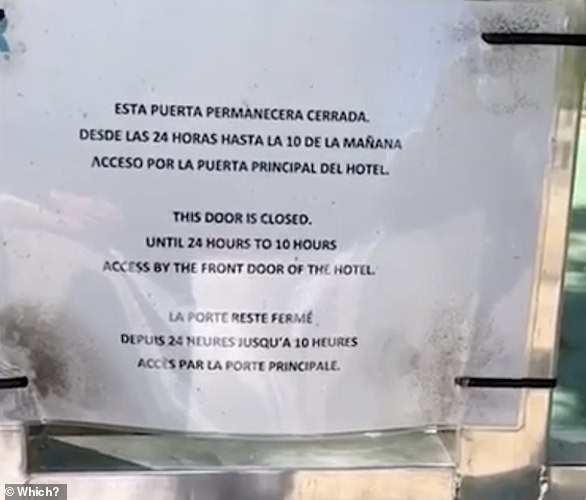 Pictured: A sign tells customers that the door to the hotel is closed

A loveholidays spokesperson told the Mirror: ‘We wholeheartedly apologise to Mr Fletcher for the inconvenience and distress this has caused.

‘Our customer services ‘in-resort’ team is urgently contacting Mr Fletcher to try to resolve this to his satisfaction and ensure that he can enjoy the rest of his holiday.

‘We can confirm that Mr Fletcher will be compensated for the inconvenience.’

Other British tourists have reported having to sleep on beaches in Europe after paying for rooms in hotels abroad that are still closed due to the lockdown.

Consumer watchdog Which? reported the findings and said that the travel agency Loveholidays has been the main offender, according to the Times newspaper.

One tourist resorted to paying £600 for an apartment for her son because she was scared he would have to ‘sleep on the beach’. The man had already paid £1,500 for a hotel that was locked down when he arrived.

Another, who set off for a break in the Spanish sun, arrived with his partner and 10-year-old son, only to find that the hotel was closed. The family were forced to seek out and pay for new accommodation.