Public preference for Joe Biden over Donald Trump in trust to handle the coronavirus pandemic has soared since March in the latest ABC News/Washington Post poll, boosting Biden – along with other measures – in the race for the White House.

Three and a half months ago the two candidates were virtually even in trust to handle the pandemic, Trump +2 percentage points, 45-43%. Today, with COVID-19 cases surging around the nation, Biden leads Trump on the issue by a 20-point margin, 54-34%.

Biden’s also advanced, nearly to par with Trump, in trust to handle the economy, after trailing in March. Biden leads Trump by 9 points on handling crime and safety, a focal point of Trump’s in recent weeks. And on race relations, Biden leads by his largest margin, 25 points, 58-33%.

Biden has his own risks, particularly a pronounced lack of enthusiasm for his candidacy. Yet the impact of that deficit remains to be seen: For two-thirds of his supporters, it’s chiefly not about electing Biden, but about defeating Trump.

Trump’s overall job approval rating is 39% in this poll, produced for ABC by Langer Research Associates – down 9 points in the course of the pandemic, with disapproval up 11. Trump remains the first president in modern polling never to achieve majority approval for his work in office, with the lowest career average on record. 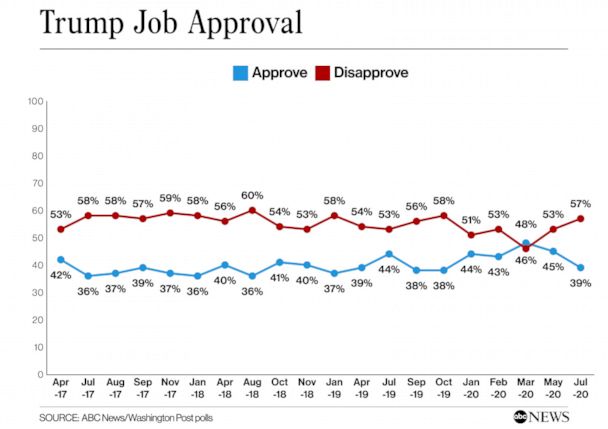 Rising disapproval of Trump’s job performance is broadly based. It’s up 22 points since March among those very worried about catching the coronavirus, to 82%. It’s also up in two of his key support groups, +20 points among rural Americans and +12 points among evangelical white Protestants, to 45 and 30%, respectively. Disapproval also is up especially among Southerners (+18 points); and Blacks, women, moderates and suburbanites, all up 15 to 16.

By partisanship, Democrats now disapprove nearly unanimously of Trump’s work in office, up 17 points in three and a half months to 95%; 56% of independents also disapprove, up 11. Among Republicans, 16% disapprove, up 10 points from late May.

Beyond job approval, Biden leads Trump by 26 points in being seen as having the better personality and temperament to serve as president. In a related finding, a vast 76% of Americans say Trump, in talking about people he disagrees with, “crosses the line in terms of what’s acceptable.” Fifty points fewer, 26%, say Biden does the same.

Sixty-one percent say Trump has done more to divide than to unite the country, more than said so about either of his two predecessors in office. When asked which candidates would do more to unite Americans, Biden leads by another wide margin, 57-33%.

Biden leads by double digits on other personal attributes as well – better understanding the problems of people like you (+17 points), being more honest and trustworthy (+14), better representing your personal values (+12) and having a better idea of what America should stand for (+10). Trump pushes to parity on just one, who’s the stronger leader, an even 45-45% split. 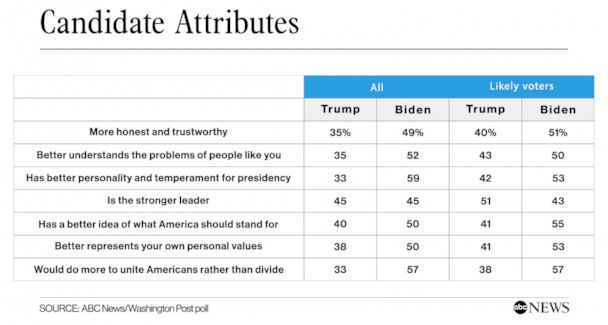 While views are similar among registered voters, Biden loses ground on three of these items among those who are likeliest to vote. In the largest difference, he goes from a 26-point lead among all adults in having the personality and temperament needed to serve as president to a slight 11-point edge among likely voters, 53-42%. He also slips among likely voters in who better understands their problems and who’s the stronger leader.

These gaps in views of the candidates inform their current standings: Americans divide 54-39% in Biden’s favor if the election were today. Among registered voters, the margin’s the same, 55-40%. Among likely voters Biden still leads, albeit by a closer 10 points, 54-44%, signaling the customary GOP advantage in turnout – potentially one of Trump’s strongest weapons. 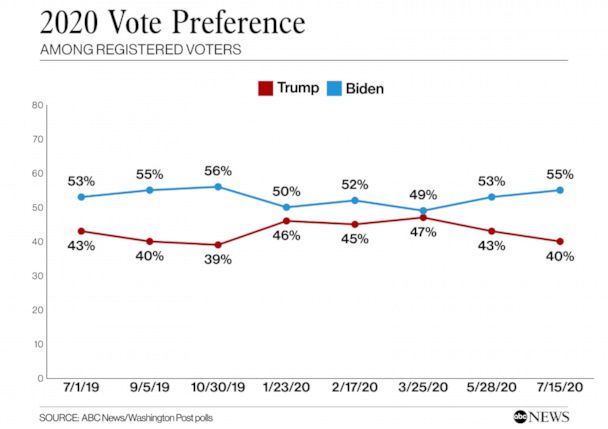 Biden’s advantage among registered voters is up from a virtual dead heat, 49-47%, in late March, before the spiraling pandemic situation hammered Trump’s ratings. Biden, similarly, was just +4 among registered voters in January, as economic sentiment hit a 20-year high. That said, what comes can go: Biden led Trump by 17 points last October and 15 in September, leads that he then relinquished, only to fully regain his footing now.

Trump’s retreat since the early days of the coronavirus outbreak has been largest in one of his core groups, rural Americans, with his lead among registered voters in this group shrinking from 47 points in late March to 18 points now, 56-38%. As noted Friday, his rating for handling the pandemic also has fallen especially sharply in rural areas. (The race is 52-43%, Biden-Trump, among suburbanites, and 68-27% in urban areas, both essentially steady.)

Regional shifts also are substantial. Biden’s advanced in the Midwest, from a dead heat to a 17-point lead. It’s close in the South, 50-44%, Biden-Trump, compared with a 13-point Trump lead in late March. And Biden is ahead by 15 points in the Northeast and a broad 30 points in the West.

In a key center group, Biden leads by 54-37% among independents, unchanged from May but up from an even split in March.

White Catholics, potentially a swing voter group, divide essentially evenly, 51-47%, Trump-Biden, vs. +13 for Trump in March; Trump won white Catholics by 61-37% in 2016. Trump currently does better, 61-34%, among non-college white men, but this is a group he won with 71% four years ago. Across the political spectrum, college-educated white women favor Biden by 60-38%, compared with their 51-44% vote for Clinton over Trump in 2016.

Notably, too, Biden wins registered voters who are very worried about catching the coronavirus by an overwhelming 82-14%, and those who are somewhat worried by a narrower 53-41%. Those who are less worried, by contrast, prefer Trump, 69-26%.

Indeed, in a statistical analysis called regression, being worried about catching the coronavirus is a significant independent predictor of vote preference, controlling for other factors including partisanship, ideology and demographics.

Eighty-six percent of registered voters say they’re certain to cast a ballot in the November election, somewhat higher than typical at this point in recent cycles – it was 79 to 81% in July 2016, 2012 and 2008 alike.

In what manner they’ll vote is another question. Thirty-eight percent of Americans say they’d prefer to vote by mail, 59% in person. In 2016, for context, 24% voted by mail, according to the U.S. Election Assistance Commission.

It’s a key point of interest given efforts by some states to encourage mail-in voting as a way to avoid virus infection at in-person polling places. If mail balloting does surge, counting those ballots could delay the vote count beyond election night.

Trump has pushed back against mail-in voting, alleging that it’s open to fraud, and the argument has some resonance: Forty-nine percent see voting by mail as vulnerable to significant levels of fraud, while 43% think adequate protections against significant fraud are in place. 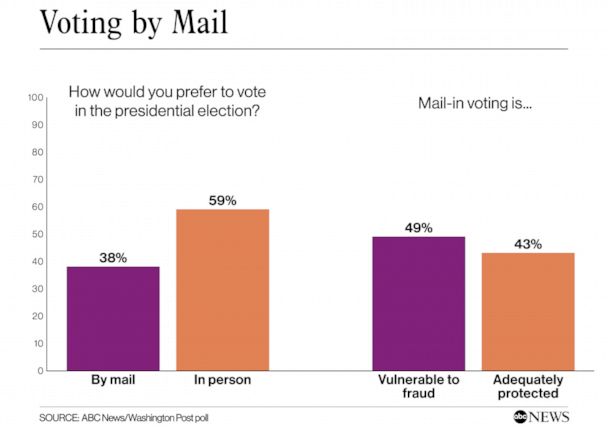 Other factors come into play. Preference to vote by mail is much higher in the West, 56%, likely reflecting its prevalence there, vs. as low as 25% in the Northeast. It’s also much higher among college graduates than non-graduates.

From how people vote to whom they vote for, the course of the pandemic is a clear wildcard in the November election. So, as noted, is the question of enthusiasm. Among registered voters who support Trump, 69% are very enthusiastic about doing so, much better than it was for him in 2016. That compares with 39% enthusiasm for Biden among his supporters. To the extent that enthusiasm translates to turnout, this could put Biden’s current lead in jeopardy.

Then again, motivation for Biden may come from another direction. Among Trump’s supporters, 72% say it’s more important to them to re-elect Trump than to defeat Biden. Among Biden’s supporters, it’s almost the opposite: Sixty-seven percent say their main interest is to defeat Trump.

This ABC News/Washington Post poll was conducted by landline and cellular telephone July 12-15, 2020, in English and Spanish, among a random national sample of 1,006 adults, including 845 registered voters. Results have a margin of sampling error of 3.5 points for the full sample and 4.0 points among registered voters, including design effects. Partisan divisions are 30-24-39%, Democrats-Republicans-independents.

The survey was produced for ABC News by Langer Research Associates of New York, N.Y., with sampling and data collection by Abt Associates of Rockville, Md. See details on the survey’s methodology here.