Karyopharm Is Trading At A Discount After Recent Additional Xpovio Approval (NASDAQ:KPTI)


Karyopharm (KPTI) is a commercial-stage pharma company that already markets its leading compound, Xpovio or selinexor, in 2 different cancer indications. Karyopharm fits the model I look for of companies with a novel technology platform that’s already clinically-validated and is trading at a substantial discount to fair value. In this article, I provide an overall view of the company as well as my thoughts on Karyopharm’s valuation.

Nearly all of Karyopharm’s approved and pipeline products are considered to be selective inhibitors of nuclear export (SINE) compounds. Cancer cells are masters at manipulating both their internal and external environment to promote their own survival and expansion. One of the ways that they do this is through nuclear export proteins like exportin-1 (XPO1). In ordinary circumstances, XPO1 transports proteins out of the nucleus to prevent levels of them from building too high and having unintended effects. What has been discovered more recently though is that cancer cells can ramp up the activity of nuclear exporters like XPO1 to remove tumor growth suppressors and other beneficial proteins from the nucleus.

Xpovio and most of Karyopharm’s other assets work by inhibiting the function of these export proteins and allowing levels of important proteins like tumor suppressors to build in the nucleus, which then leads to an overall inhibition of growth. Additionally, the build-up of tumor suppressor proteins in the presence of DNA damage often leads to apoptosis (cell death) of cancer cells but leaving healthy cells that won’t have as high of levels of DNA damage largely unaffected.

Xpovio was approved in July 2019 for penta-refractory multiple myeloma. This is essentially 5th line treatment, after the patient has failed at least 2 proteasome inhibitors, at least 2 immunomodulatory agents, and at least 1 anti-CD38 monoclonal antibody.

As you can see from Figure 2, this penta-refractory indication has an addressable US market size of at most about 6,000 patients per year at present. Through the end of 2019, 1,400 prescriptions of Xpovio had been sold, netting Karyopharm $30.5 million in sales, which comes to about $21,786 per prescription. Karyopharm has already topped this in 2020 with $16.1 million in Q1 sales and another $18.5 million in Q2 despite the ongoing pandemic. There’s still plenty of growth potential even on just this indication since each patient could potentially get up to 12 prescriptions per year, meaning full market penetration would be equivalent to about 72,000 prescriptions per year, or about $1.5 billion in revenue by my count. Obviously, Karyopharm won’t get 100% of the potential market, but I think it’s helpful to consider that even a more realistic market share, like say 20%, could result in about $300 million in annual sales in just this one market. 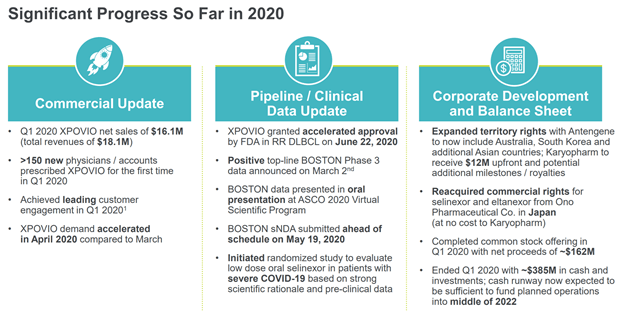 Karyopharm has also made significant progress in advancing the rest of its pipeline this year. Karyopharm’s strategy is to get Xpovio approved in earlier line multiple myeloma treatment as well as numerous other cancer indications. The first of those additional indications, diffuse large cell B-cell lymphoma, a type of non-Hodgkin lymphoma, received FDA approval in June as a 3rd line treatment after 2 prior systemic treatments have failed. 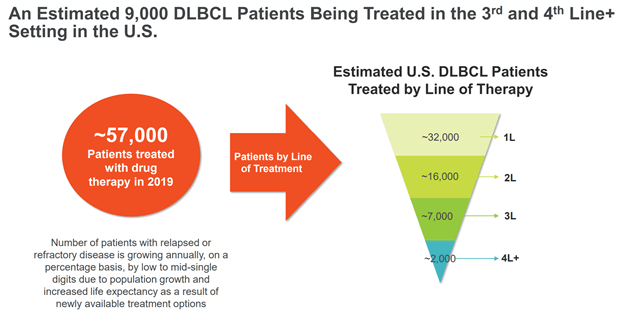 The DLBCL market for 3rd line and later treatment is about 9,000 patients each year. Again this could translate to a big number for Karyopharm by my calculations. If every patient got 12 monthly prescriptions, this would be 108,000 maximum prescriptions in this indication and about $2.35 billion in revenue at the current amount Karyopharm has been booking off of Xpovio sales. A more realistic percentage of market penetration then like 20% would mean nearly $500 million in sales. 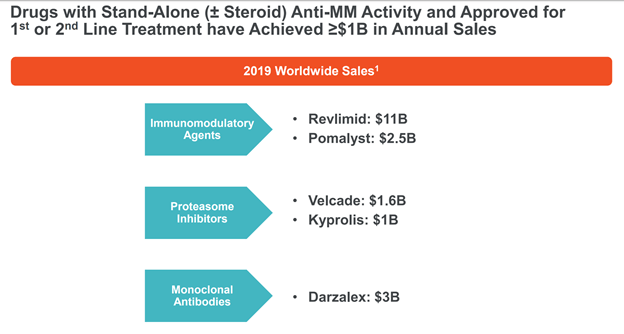 Karyopharm reported strong data from its Phase 3 BOSTON trial which makes a 2nd line indication a possibility. This is critical because it could add another 32k patients per year to Xpovio’s addressable market opportunity in MM which is a multi-billion dollar opportunity. The chart in Figure 5 hopefully drives home the point – multiple therapies that are approved for 1st or 2nd line MM treatment are huge blockbusters. Karyopharm is conducting a Phase 1b/2 STOMP trial aimed at eventually netting the 1st line indication for Xpovio.

Karyopharm has partnerships with Antengene and Neopharm for commercialization in several Asia/Pacific markets and Israel/Palestine, respectively. These partnerships should produce additional cash flow to support Karyopharm’s developmental efforts which are quite substantial. Karyopharm also has a huge pipeline even in addition to what I’ve already described. 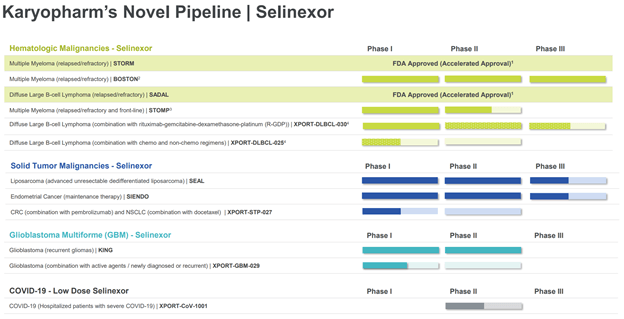 For the sake of brevity, I’m not going to discuss any of these additional pipeline developments, but it should be clear to even a casual observer that Karyopharm has numerous potential ways to keep adding to its currently approved indications and cash flow.

Insider and Institutional Ownerships Are Substantial

While not one of my biggest considerations, I do like to see whether management owns a substantial amount of shares and is thus incentivized to think like a shareholder. Karyopharm’s management does seem to have enough ownership for this to work in investors’ favor. Karyopharm’s President and Chief Scientific Officer owns over 750k shares, and the CEO owns about 550k.

It’s also worth noting that institutional investors appear to have been loading up on shares since Xpovio’s original approval last summer. Around that time, institutional ownership was about 32% of the overall float, but now that has ballooned to about 44%. It makes me feel better about my investment that far deeper pockets than mine clearly like the company’s recent trajectory.

Karyopharm’s balance sheet looks strong after a $161.8 million cash raise in Q1. With that raise included, the company ended Q1 with about $385 million in cash and equivalents. Karyopharm does have about $111 million in convertible notes, but these don’t mature until 2025, giving the company plenty of time to grow cash flows before potentially having to pay them back.

Karyopharm’s net loss was about $53 million in Q1 which would annualize to about $200 million. Karyopharm’s net loss for this year will likely be lower though as Xpovio sales continue to pick up. Karyopharm thinks this level of cash is sufficient to get the company to mid-2022, and I definitely agree based on my analysis.

Before I spend substantial time researching a company, I want to make sure that they at least look like a decent value based on analyst estimates of future sales and earnings. 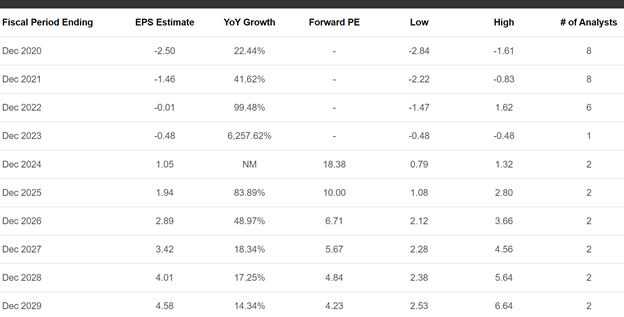 Although I think these estimates are very conservative if Karyopharm is successful in getting Xpovio approved in earlier lines of multiple myeloma, it’s worth noting that these future sales and earnings ratios look well below industry average of around 5 P/S and 15 P/E. I then discounted the estimates by 10% per year to get an idea of what type of present value they suggest for Karyopharm.

Figure 8: Karyopharm Present Value Estimate (source: revenue and earnings data from Seeking Alpha and my calculations based on that data)

As you can see from Figure 8, these present value estimates are meaningfully above where the stock is currently trading under $20/share. This convinced me to continue my research and eventually perform a discounted cash flow analysis.

I attempted to calculate the present value of Karyopharm’s potential future cash flows from its 2 current marketed indications plus second-line MM and then subtracted out estimated R&D for all of Karyopharm’s current pipeline and SG&A expenses. I estimate SG&A expenses as 34% of revenue once the company has substantial cash flow and scale the numbers up fairly evenly from present values for the years in between. I didn’t adjust any for another future dilutive cash raise because Karyopharm’s current amount of cash got it to around the time the company would become cash-flow positive in my model.

For each of the 3 indications that I used the market size estimate I included above and used just a 10% market share to be conservative. I’ve included most of the relevant inputs and results for each pipeline asset and the company as a whole in Figure 9:

Figure 9: My Discounted Cash Flow Analysis of Karyopharm (source: my calculations based on Karyopharm’s Q1 update)

With the pipeline added in as well as the fact that my market share estimates are intentionally on the low end, I could easily see Karyopharm having huge upside on continued success.

Karyopharm has a robust technology platform of SINE compounds that stand poised to garner approval in numerous cancer indications. Karyopharm is well funded for at least 2 years and maybe longer depending on how sales pick up. The company looks undervalued on far less than its full pipeline, and the potential COVID-19 indication for Xpovio in particular looks like a free call option for investors at present. I already have a position in Karyopharm that I intend to hold onto for the long term.

Disclosure: I am/we are long KPTI. I wrote this article myself, and it expresses my own opinions. I am not receiving compensation for it (other than from Seeking Alpha). I have no business relationship with any company whose stock is mentioned in this article.

Additional disclosure: I’m not a registered investment advisor. Despite that I strive to provide the most accurate information, I neither guarantee the accuracy nor the timeliness. Past performance does NOT guarantee future results. I reserve the right to make any investment decision for myself without notification. The thesis that I presented may change anytime due to the changing nature of information itself. Investment in stocks and options can result in a loss of capital. The information presented should NOT be construed as a recommendation to buy or sell any form of security. My articles are best utilized as educational and informational materials to assist investors in your own due diligence process. You are expected to perform your own due diligence and take responsibility for your actions. You should also consult with your own financial advisor for specific guidance, as financial circumstances are individualized.