EUR/USD is working on its seventh consecutive up-day as it attacks the 2008 trend-line. It is a rather significant trend-line not only due to its age, but because it also consists of several important peaks over the years. The line consists of highs created in 2008, 2011, 2014, and 2018. Could 2020 mark another major high, or will it break on through and rather even further?

We will want to pay close attention to the price action for clues about both how the short and long-term could play out. It’s been an extended run, so seeing EUR/USD turn lower here should come as no surprise. A reversal day or sharp down day may at the least indicate a near-term correction is unfolding, or perhaps the beginning of a larger, long-term decline.

If weakness develops soon price action may quickly turn sloppy as either the Euro could try to consolidate gains for another attempt at higher prices later, or it will work on putting in a topping formation of sorts that validates the 2008 trend-line. It is entirely possible that price slices on through too, but this scenario appears to have a lower probability at the moment.

To get a full-on breakout through the trend-line, ideally we want to see a weekly closing breakout in the 11800s or higher given the trend-line’s duration. It would constitute a monthly close as well given it is the end of July. Should this turn out to be the case, even though a breakout is underway, waiting for a pullback/consolidation may be the prudent approach with EUR/USD currently looking extended.

Check out the Q3 Euro Forecast 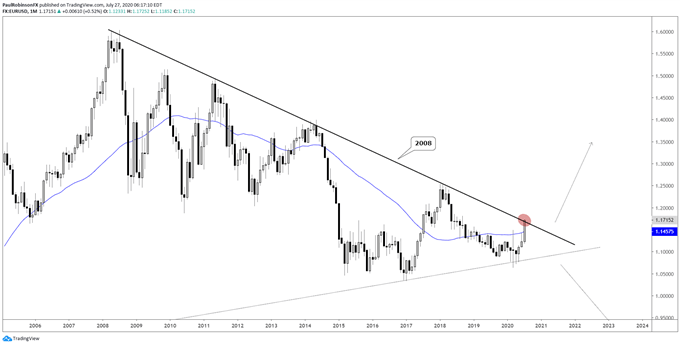