The Mexican Peso proved stronger versus the US Dollar last week, with USD/MXN rates dropping by -1.15%, marking just the second time in seven weeks that the pair retreated. But limited gains over the past near-two months have left the pair vulnerable for a significant technical breakdown. Outside of USD/MXN, the Peso’s prospects appear limited: CAD/MXN rates continue to press higher, while other MXN-crosses against the majors are decidedly moving against the Peso’s favor.

Heading South of the Border?

There’s an argument to be made that USD/MXN rates have been consolidating in a symmetrical triangle since the end of February, contextually proving to have a bullish bias given the preceding directional move. Yet price action in recent weeks has been discouragingly weak, with no follow-through to the topside at a critical moment: just as price action moved into the terminal vertex of the triangle. 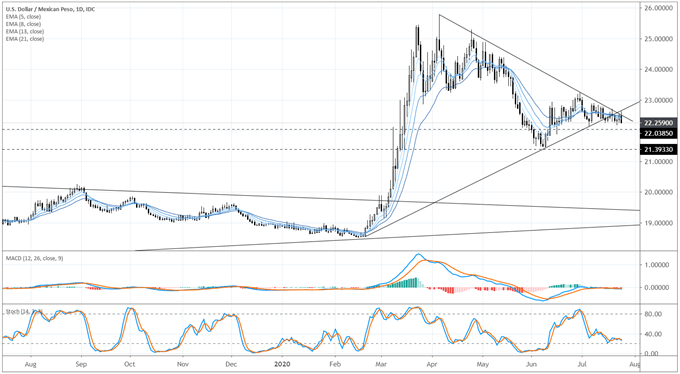 To this end, given that trading is a function of both price and time, USD/MXN rates have continued to move sideways, but in context of respecting resistance within said triangle all the while breaching triangle support. The bearish outside engulfing bar on the daily chart to end the week, occurring as a failed attempt to retake triangle support, is a bearish omen for USD/MXN rates.

Concurrently, bearish momentum is starting to accelerate. USD/MXN rates are fully below their daily 5-, 8-, 13-, and 21-EMA, which is in bearish sequential order. Daily MACD is turning lower just below its signal line, while Slow Stochastics have started to decline again towards oversold territory. The path of least resistance is emerging to the downside in the short-term. 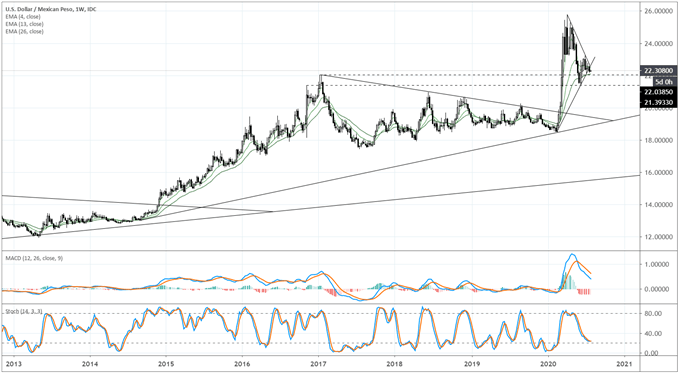 The prospective triangle failure warrants a review of longer-term timeframes. The 2017 high comes in at 22.0385, coinciding neatly with the weekly 26-EMA, equivalent to a six month moving average. Ultimate failure below this area would bring into focus the June lows once more at 21.459. 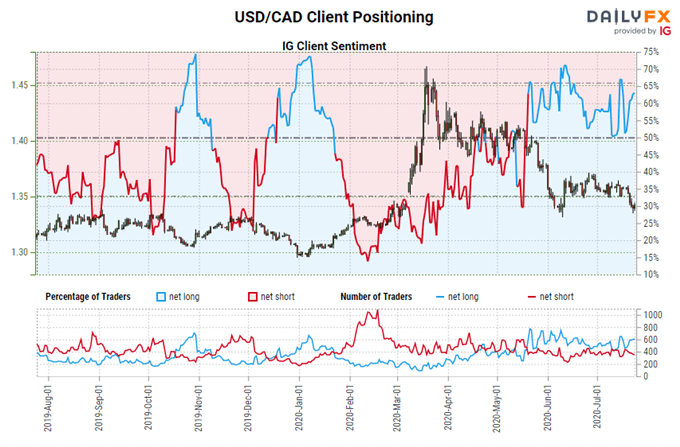 Traders are further net-long than yesterday and last week, and the combination of current sentiment and recent changes gives us a stronger USD/CAD-bearish contrarian trading bias.