The S&P 500 continued its way higher last week, finally filling the February 24 corona-gap. All that is left to come full circle is make a new record high, which can be done by crossing 3393. It seems at this juncture that is all but a given, but of course there are no guarantees.

With that said, longs need to continue to vigilant as even though a new record high is only a short distance away it doesn’t mean a pullback won’t develop first before marching to a new high. A pullback will likely find support around 3276 or a the trend-line from May. Overall, the trading bias remains bullish as a new week rolls around.

Check out the Q3 Equities Forecast

The DAX is lagging far behind the stronger US market, trading well below the June high let alone the all-time highs. There is solid resistance around the 12950-area. At its feet, the DAX has support right around the 200-day MA at 12206. Perhaps at some juncture the DAX will get into gear and rally, but if the S&P keeps breaking higher with no progress out of the German benchmark, it could later on be the go-to short once the S&P eventually turns lower. For now, it not likely not to fall too far without global stocks declining in earnest. 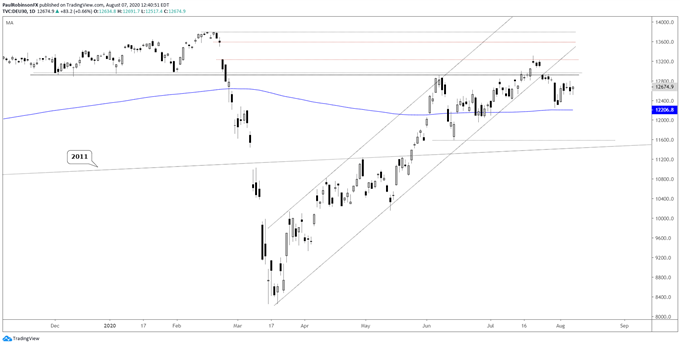 The FTSE remains on the weak-side with it far below the all-time high and well off the early June high. The general tone remains negative, but with some time it could morph into a bull-flag. For the coming week the key for a potentially bullish outlook to remain intact is for the FTSE to stay above last week’s low at 5857. Overall, the trading bias is neutral for now given the lack of a good-looking risk/reward opportunity.