Disney Is Redefining The Game (NYSE:DIS)

The Walt Disney Corporation (NYSE:DIS) has suffered a very serious loss in revenue over the last six months. However, the long-term prospects of the company remain solid. The firm has more than met its expectations with the release of Disney+, and despite the coronavirus, people still have an appetite for the theme parks. Furthermore, the release of Mulan on Disney+ could signify the beginning of a new way of business which could bring billions in revenues.

Investors have been underwhelmed by Disney’s latest quarterly reports. With a drop of over 40% in revenues, it is hard to justify an investment in Disney in the short term. Below, I break down the latest available financial data. 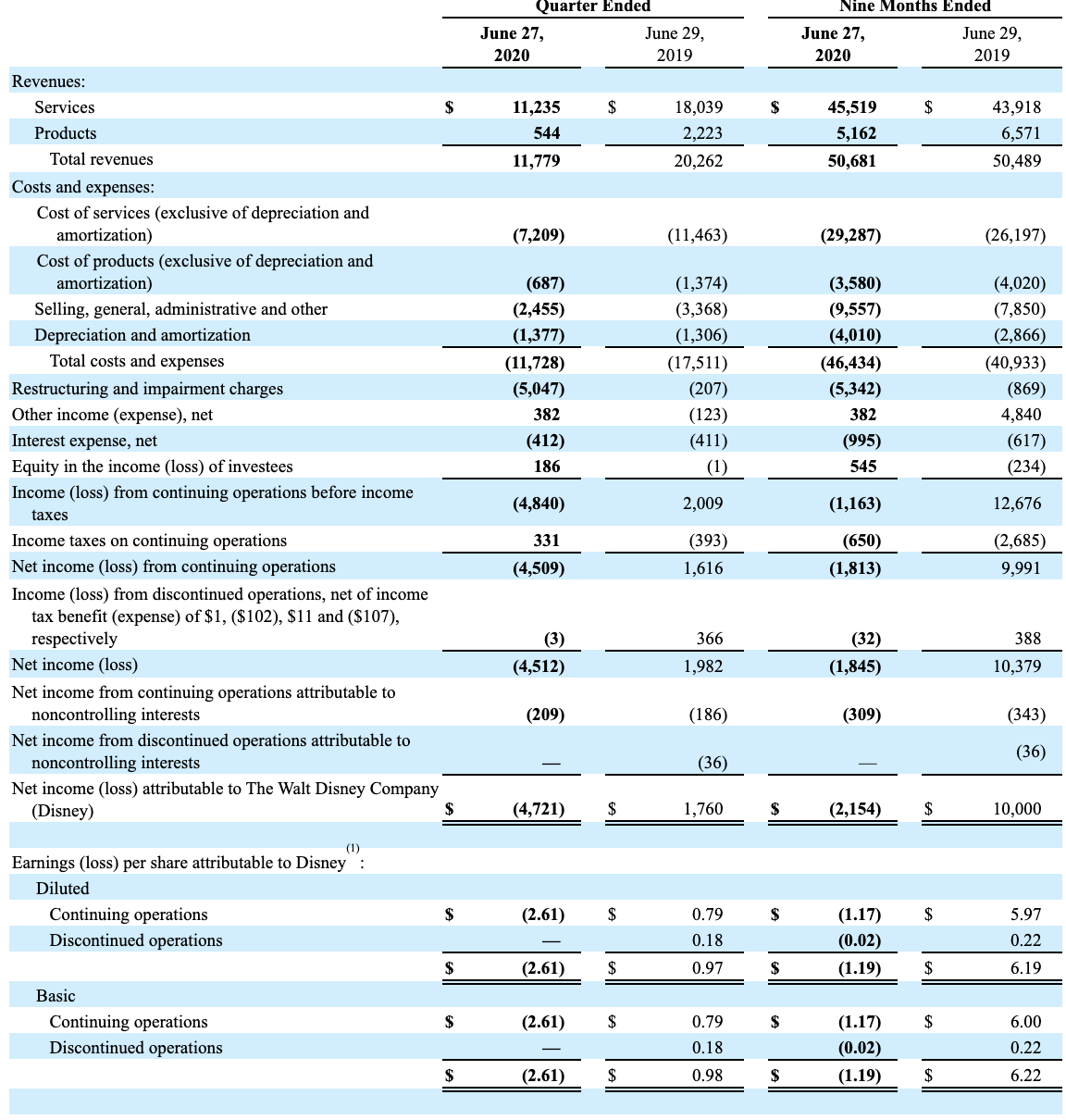 Over the last 3 months, Disney has produced a loss of $2.61 per share. This is a big turn from last year’s $0.79 EPS, and surely something no one was expecting. While Disney has made an effort to reduce costs, these have been unable to match the fall in revenue. The nature of some of its segments, such as “Parks”, prevents this. However, if we were to eliminate “Restructuring and impairment charges”, the company would have turned a profit.

Disney operates in four main segments. Revenue from “Media Networks” remained rather flat. The biggest loser was “Parks, Experiences and Products” which fell in revenues by a whopping 85%. “Studio entertainment”, which reflects the income from movies and such, was also significantly lower. The only sector which outperformed last year’s quarter was “Direct-to-consumer & International”, which reflects, amongst other things, the incomes from Disney+. However, it is worth noting that this segment currently operates at a loss.

Having said this, the right way to value a company like Disney is not for what it is doing, but for what it can achieve. In this regard, there are three points I’d like to make, which, in my opinion, point towards a bright future for the company.

The Mulan film will be available for around $30 to subscribers, who, upon purchase, will be able to view the film indefinitely. This PPV system was hugely popular a few years ago, and as I’ve argued before, with streaming companies offering a variety of different shows, this could be the way forward for the whole sector. HBO, for example, has some great shows, but I might not want to subscribe to the whole package. Why shouldn’t I be able to “purchase” the show I like?

An argument against this could be made for Disney. Mulan’s release on Disney could “cannibalize” revenues from cinema-goers. At this point, this is a moot point, but in the long-run, this is something Disney will have to consider. Should they release the film the same day as the cinemas or later? In any case, this form of content delivery could add billions in revenue to the already incredibly successful Disney+. And of course, it adds a silver lining and “coronavirus” insurance if you will.

While this argument has been banded around for many businesses, I do think it is very relevant when it comes to parks openings. Theme parks will gain from the increasing demand from local tourism. As the chart in the next section will show, most of Disney’s revenues come from the domestic market. To this extent, the theme parks might see equal or even higher demand once the coronavirus situation clears up despite less international tourism. Furthermore, the idea that the park might be less crowded will incentivize people to go there.

The bottom line is, there is still a huge demand for Disney’s theme parks and experiences. The market may have priced in the current decline in revenues, but it is not accounting for the fact that, in the long term, these parks will continue to generate cash. The opening of the Shanghai park was wildly successful, with tickets selling out within minutes.

Last, but certainly not least, Disney stands to gain massively from the Chinese market. The following chart shows a breakdown of revenues by region: 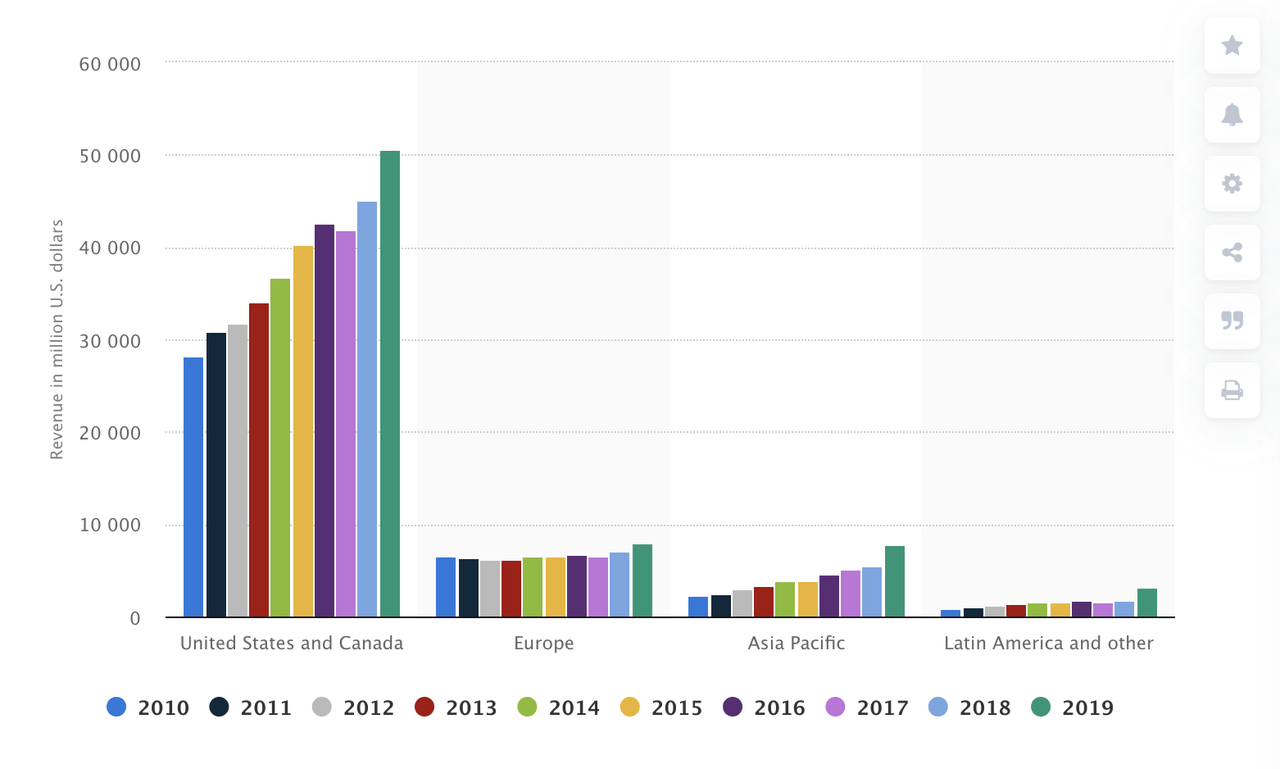 As we can see, most of Disney’s revenues come from Canada and the U.S. The important thing to look at here, though, is that big spike in 2019 in Asia Pacific. The region looks poised to overtake Europe in the next few years. This is even more true, with China now leaving coronavirus concerns and measures behind. Mulan will be released in cinemas in China, and Disneyland Shanghai reopened a while ago and is already thriving.

Given the above, I have made a 5-year DCF valuation using finbox. The results are shown below:

The above calculations are based on a few assumptions. For 2020, I have assumed a fall in revenues of 30%. After that, we see a steady increase leading to double-digit territory by 2022. Overall CAGR is forecast to be 2.2% for the next five years. Meanwhile, the EBITDA margin is forecast to slowly increase back to a range of around 28%. With a discount rate of 7%, this would give us a target price of $168.75 and would imply an upside of around 30%.

While Disney is certainly not in a good place right now, the current price seems to undervalue the long-term potential of the company or overestimate the effects of the coronavirus. The above valuation is, in my opinion, on the pessimistic side, and the value of Disney will increase significantly over the long term.